New research shows that the IT industry is overwhelmingly positive about the future and keen to embrace new technologies but facing budgetary pressure.

Earlier this year, over 100 Digital Leader members joined nearly 200 other technologists from around the world in completing our 2020 tech trends survey. The survey asked members of the IT community to share their insights on future trends and views on adoption rates for different technologies during the next decade. Below are the first round of results on attitudes, technologies and trends expected to shape the next decade.

When asked about their feelings in relation to 2020 and the new decade, the vast majority are positive about the technology landscape (over 80%) with less than 10% ‘concerned’ or ‘very depressed’.

34% of the respondents were ‘extremely positive’ while 47% were feeling ‘good’ about the new decade. Less than 1% were ‘very depressed’ about what lay ahead.

Alex Tatham, Managing Director of IT Distributor Westcoast and a respondent to the survey commented:  “It is no surprise that these results show IT companies are optimistic about 2020 as there is so much opportunity created by businesses of all sizes transforming or establishing their businesses with a ‘Digital First’ priority. Change is a constant but seems to accelerate ensuring everyone is upgrading just to keep up.  The winners will come from those organisations that can think ahead.”

When asked how they believe the trend for the following themes would change in the next ten years, across their sector, the largest increase (‘increase significantly’ plus ‘increase’) was predicted for Digital Transformation (83%) compared to 67% for Agile, 60% for the use of third parties and 59% for legacy challenges.

Across eight technologies, for 53% of the respondents, AI in relation to augmenting existing software was the technology most likely to experience ‘a lot more’ adoption. This was closely followed by IoT, edge computing (48%) and Voice including real-time translation (47%). 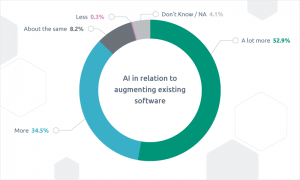 However, for the technologies expecting less rapid growth, Blockchain (19% ‘A lot more’ adoption) and No code development (24%) also ranked most highly for ‘Don’t know / NA’ at 16% and 18% respectively. This may mean that future growth will occur but respondents are generally less confident predicting it due to less familiarity with those technologies and their applications at this time.

Robin Knowles, CEO, Digital Leaders, a network with over 100,000 leaders across all sectors involved in digital transformation, shared the survey with their members, and commented: “2020 is such an exciting time for new technologies, but AI in particular is an area with enormous potential but where the hype and reality are still some way apart. However, that will change rapidly in the next decade and there is no doubt that AI’s impact on software development will be huge and cannot be ignored by business and government”.

Technology budgets in 2020 and the new decade 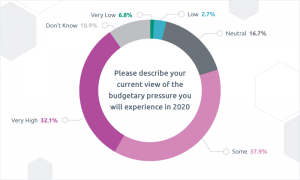 Generally speaking, the larger your IT department, the higher the budgetary pressure is perceived.

Adrian Leer, Managing Director, Triad Group Plc added; “It’s fantastic that, despite the budgetary pressure that technologists are expecting in 2020, they remain so positive. I think that the next decade will be one of more realistic expectations and more mature decision making when it comes to new technologies.”

Will technology adoption bring us closer or drive us further apart?

Why Intelligent Automation so often fails to deliver its promised benefits, and how to fix it